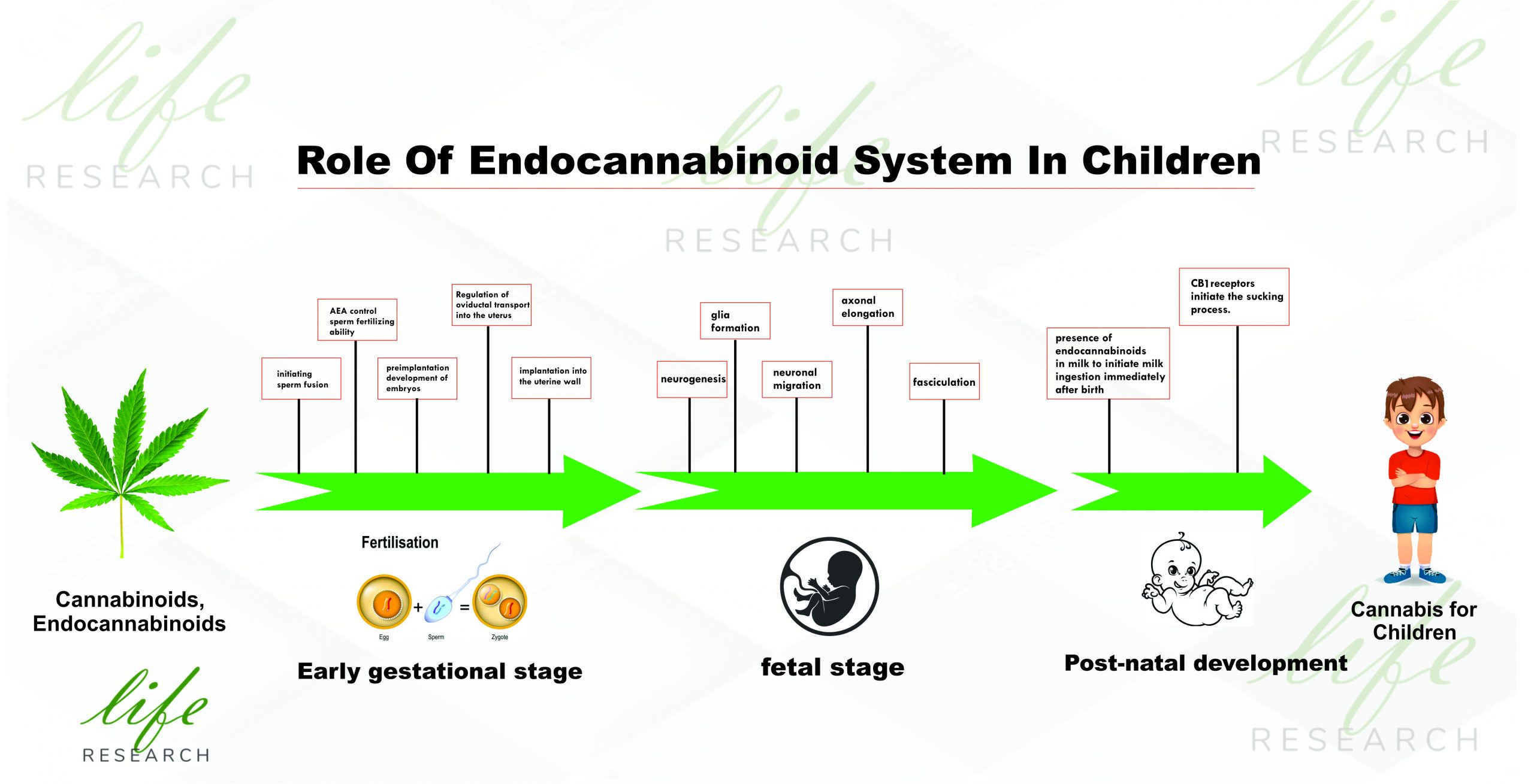 A discussion of cannabis in pediatric health was all but an unspeakable taboo even ten years ago.

It’s still difficult to talk about today, but we owe it to our children to follow facts and science when making decisions about their health.  Research studies show that children have much to gain from non-impairing cannabinoids.

The endocannabinoid system is highly active in young children and adolescents which provides an excellent opportunity for therapeutic and preventive cannabis use.

The human ECS develops from the earliest embryonic and fetal stages. Cannabinoids like CBGa, exhibit a substantial effect on social behavior in early development. Children can benefit from enhanced interpersonal communication and less negative emotions. As always, it’s important to find the right combination of cannabinoids and terpenes.

Children and the Endocannabinoid system

CB1 receptors were detected in human embryos at week 14 of gestation.

Endocannabinoids like 2-arachidonoylglycerol are present in maternal milk and may constitute one of the earliest forms of defense for nursing babies. The ECS is also established to assist prenatal brain development and post-natal suckling, which may be critical to healthy development. Recall that cannabinoids like CBGa can trigger neurogenesis (the formation of new brain cells) in children and adults.

ECS and its receptors are important for a successful embryonal passage through the oviduct and implantation into the uterus. This is achieved via the enzymatic control of endocannabinoids.

Endocannabinoids and the CB1 receptors are important for regulating neural progenitor differentiation and guiding axonal migration and synaptogenesis during the fetal stage. Postnatally, the activation of CB1 by 2-AG appears to play an important role in initiating milk suckling and may be responsible for activating tongue muscles.

Cannabis medicine has a long history of providing anticonvulsant properties. Its anticonvulsant effect was reported in the ancient Middle East and India for at least 4000 years. This and many more historical claims led to the possible use of THC-rich cannabinoids for epileptic patients in the 19th century.

While CBD-based medication (epidiolex) was endorsed by the FDA to remedy chronic epileptic seizures associated with Dravet and Lennox–Gastaut syndromes in 2018, recent research reports show CBGa may offer a better anticonvulsant property. The research discovered that CBGa can provide better relief from seizures and has a more potent interaction with clobazam for treating epileptic convulsions. The CBGa molecule interacted with numerous epilepsy-relevant targets, including GABA, TRPV1, and GPR55 receptors. Other cannabinoids capable of producing a similar interaction in childhood epilepsy include CBDVa and CBGVa.

Children who suffer from Autism Spectrum Disorder (ASD) are prone to behavioral difficulties like tantrums, non-compliance, aggression, and self-injury. These behaviors are often worse in children with neurodevelopmental disorders.

The possible use of cannabis and cannabinoids in ASD stems from the high tolerance rate of children to cannabinoids. Cannabinoid therapy can alleviate symptoms and reduce anxiety and irritability. It may also play some important roles in social interaction. Recent research on Cannabinoids for ASD shows about 80% improvement after six months of treatment. Cannabinoids like CBD improve dystonia, spasticity, and sleep disorders and might help reduce the symptoms of Tourette syndrome.

The sleep-inducing nature of cannabinoids can be traced to their ability to trigger the release of feel-good hormones, promote internal balance and reduce the activity of free radicals.

Cannabinoids therapy is very successful in children with ASD because CB1 receptors are highly expressed in the frontal cortex and subcortical areas linked with social functioning. The receptors and their endogenous ligands AEA and 2-AG can regulate social play and anxiety in humans. Activating the endocannabinoid system and administering cannabinoids like CBD and CBGa can restore social deficits and increase prefrontal GABA activity.

A study discovered that THC-rich cannabis dosage could be an option for steroid-based medicines for people with Crohn’s disease due to the anti-inflammatory properties of various cannabinoids. Further data suggest that CBGa aids digestive health and reduces gut inflammation for those with IBD.

A study found that medicinal cannabis may also help reduce anxiety and improve appetite among people undergoing cancer treatment. The FDA has approved dronabinol, a synthetic cannabinoid, for nausea relief and vomiting associated with cancer in children. The same is also used to stimulate appetite.

While several researchers have reported the anti-cancer properties of CBGa and other cannabinoids, its possible use in pediatric cancer is still under study. Note that CBGa possesses an excellent antioxidant property which should theoretically reduce the spread of cancer cells.

Is Cannabis Safe for Children?

Concerns on this topic include addiction, decreased motivation, mild cognitive decline, and schizophrenia, all of which are directly linked to the direct consumption of THC. Using cannabis-based products with a high concentration of THC can create more problems than we are already trying to solve.

At the same time, children possess a highly active ECS which presents an excellent opportunity for therapeutic and preventive use. Although children are vulnerable to a host of challenges due to the nature of their bodies and systems, they may benefit greatly from cannabinoids for the same reason. So far, animal models show that using pure CBD and CBDV during early development is very safe.

Bottom line: when it comes to cannabis & children, consult your informed physician and steer clear of THC.