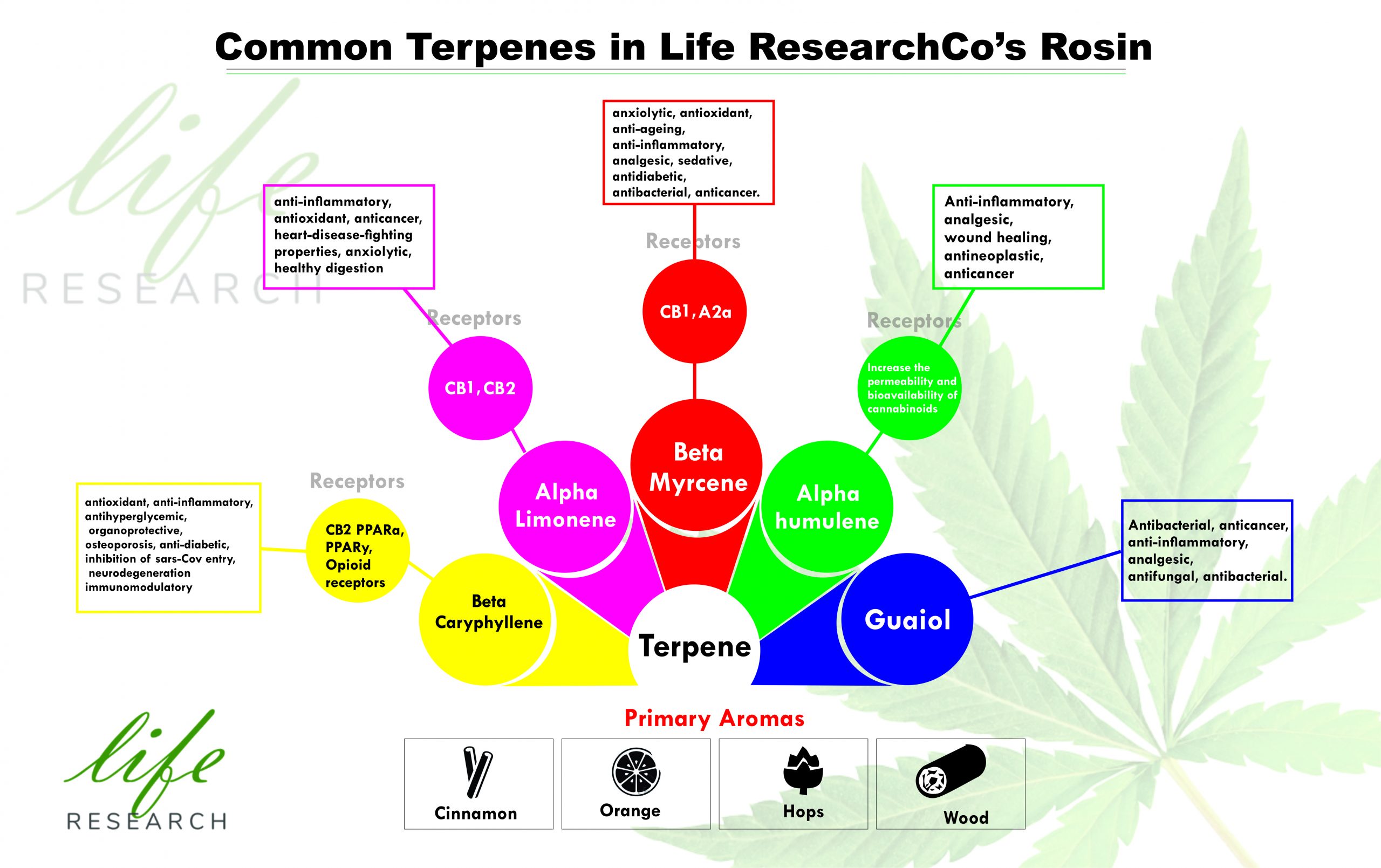 This article will quickly cover the importance of terpenes to CBGa cannabis medicines. Research describes terpenes as having a special “cannabis synergy” or “entourage effect” with major cannabinoids, like CBG, CBD, and THC (and their acidic forms). A growing volume of studies show CBGa to have a unique balancing effect on the ECS, and new science is emerging daily. Groundbreaking work from Oregon State University has shown CBGa to be an effective preventive for the Covid-19 virus and variants.

This is just one example of how CBGa presents a new, inexpensive, and sustainable way to treat an unprecedented range of diseases.

It all started with the high-CBGa Hemp chemovar

In the past, CBG and CBGa only constituted tiny fractions in the typical hemp plant.

The terpenes  may vary from strain to strain but for the purpose of this article, we used the terpene profile from CBD Informative’s review of life Research CBGa Rosin.

The third-party lab testing found the following terpenes in majority:

It may seem sensational, but CBGa’s potential to alleviate suffering and change lives worldwide is difficult to understate. Thus, these 5 terpenes have a foundational role to play in a new global effort to improve society through a reconnection with natural medicine and our innate ability to live in cosmic harmony: Mind-body homeostasis

β-caryophyllene (BCP)  is described as an agonist of CB2 receptors. It is the first known dietary cannabinoid with a GRAS status (generally regarded as safe) and approved by the FDA for food use. It is responsible for the spiciness of pepper and is a common constituent of cannabis, copaiba, rosemary, hops and cloves.

β-caryophyllene (BCP) is one of the first cannabis derived compounds and can bind directly to the cannabinoid receptors like the CB1 and CB2. It is often associated with the psychoactive effects of some cannabinoids like THC and is directly beneficial for disease conditions like anxiety and depression, colitis, diabetes, cerebral ischemia and liver fibrosis. It can also improve the bioavailability of orally administered cannabis products. CB2 agonist. After binding to CB2 receptors, BCP can inhibit adenylate cyclase (an enzyme responsible for modulating regulatory roles in organisms). As a CB2 agonist, BCP also can increase immune responses in users. It can also activate Peroxisome proliferator-activated receptors (PPARs) and is speculated to play an important role in trinity of infection, immunity and inflammation associated with Covid-19. The study conducted in 2020, unveiled how 154 compounds can interact with COVID-19-associated immune genes. BCP and its derivative, BCP oxide was found to target immune genes thus serving as a potential agent against COVID-19. BCP also shows a good activity as tissue protective and can modulate several signaling pathways. It can produce Anti-allodynic effect, anti-diabetic effect. BCP also has antioxidant, analgesic, antidepressant and anxiolytic effects, as well as antitumor, and neuroprotective properties.

According to an article published by the National Institute of Health, BCP has an almost ubiquitous synergy with CBGa:

They display unique therapeutic effects that may contribute meaningfully to the entourage effects of cannabis-based medicinal extracts. Particular focus will be placed on phytocannabinoid-terpenoid interactions that could produce synergy with respect to treatment of pain, inflammation, depression, anxiety, addiction, epilepsy, cancer, fungal and bacterial infections (including methicillin-resistant Staphylococcus aureus). Scientific evidence is presented for non-cannabinoid plant components as putative antidotes to intoxicating effects of THC that could increase its therapeutic index.

Limonene is responsible for the distinct citrus aromas in cannabis products. It was reported to possess some anti-cancer properties in mice and may directly interact with the CB1 receptors. It produces antinociceptive, anti-inflammatory and gastroprotective characteristics. It plays a critical role in neurodegenerative diseases like Alzheimer’s disease, epilepsy, anxiety, multiple sclerosis and stroke. Limonene is speculated as one of the cannabis terpenoids that can activate the CB2 receptor thus, producing analgesic effects.

Its cannabis entourage effect consists in an amplification of the receptor target effects of CBGa, boosting its mood-lifting properties.

This terpene is responsible for the earthy, fruity and clove-like smell of cannabis and comes with some levels of therapeutic use in treating dysentery, diarrhea, hypertension and diabetes. It is believed to synergize the activities of terpenes and other compounds in several ways. Some researchers have reported the high permeability of myrcene in penetrating the Blood-brain barrier (BBB), thus aiding cannabinoid transports into the brain. It also enhances transdermal penetration of administered cannabinoids.

Myrcene has a sedative effect and is thought to be associated with the couch-lock sensation of cannabis. Users might consider supplementing it with CBG or CBD to promote relaxation and ease insomnia.

α-Humulene, is another terpene with an earthy, peppery scent profile and strong anti-inflammatory properties. Another NIH article summarizes research on Humulene:

α-Humulene, given either orally or by aerosol, exhibited marked anti-inflammatory properties in a murine model of airways allergic inflammation, an effect that seemed to be mediated via reduction of inflammatory mediators, adhesion molecule expression and transcription factors activation.

Research on Humulene-specific cannabis synergy remains sparse at this time, but as more and more private sector and institutional interests rally behind cannabis medicine, we’re sure to see some amazing breakthroughs in the near future.

Guaiol is an oil-based terpene (which makes it unique among cannabis terps) that occurs naturally in pine-smelling flora.

The most interesting research on guaiol observed its antitumor effects in mice. Besides that, it remains another critically understudied compound. This statement is twice as true when it comes to guaiol’s role in cannabis medicine.

The most salient deficiency is a lack of knowledge regarding regulation of cannabinoid production. Understanding the biosynthetic pathways and regulation of terpene synthases producing the Cannabis terpenoids has barely been initiated (Booth et al., 2017) and remain ripe targets of additional research (Russo, 2011).

This quote from the cited research is an excellent summary of the current state of cannabis research. Much progress has been made but we, as consumers and beneficiaries of this medicine, can do more to increase the demand for further scientific inquiry just by having this very discussion.

Links to relevant research articles are embedded in this article.