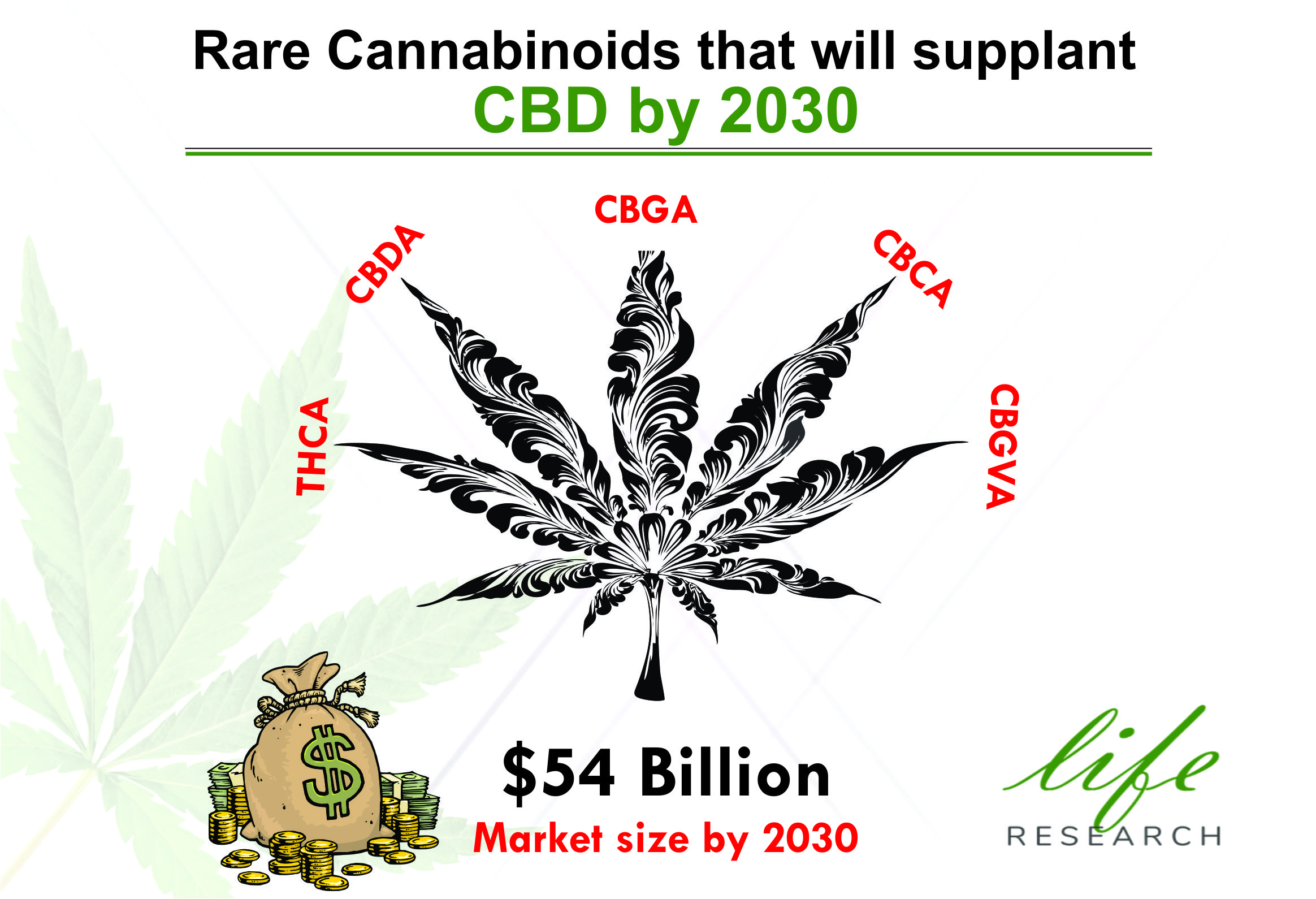 Cannabinoid acids which were initially thought to only take part in the formation of neutral cannabinoids have recently caught the attention of cannabis researchers. Some of the research reported how acidic cannabinoids like CBGA outperformed their neutral counterparts.

These rare, effective, but neglected groups of cannabinoids exhibit an excellent level of interaction with the cannabinoid receptors (although some of them don’t interact with CB1 and CB2 receptors) and provide their therapeutic benefits. In this article, we shall explore the wonderful world of cannabinoid acids and how they may serve as an important disruption point in the cannabis industry.

Some acidic cannabinoids with therapeutic potentials

Cannabigerolic acid (CBGA) is the direct product of olivetolic acid, thus making it one of the first cannabinoids formed in the cannabis plant hence the name, “mother of cannabinoids.” CBGA is later converted to other cannabinoids via the activity of synthase enzymes.

While most of the CBGA are converted to other cannabinoid acids, there are cultivars that can provide researchers with high CBGA content suited for its medical and recreational use.

CBGA can interact with a vast array of receptors to provide anti-inflammatory, anticancer, antitumor, antimicrobial, and antidepressant activities. There are also reports on how CBGA can increase the penetration of ocular drugs, thus promoting eye care. CBGA is also actively involved in the production of new brain cells and promotes bone health.

Cannabigerovarinic acid (CBGVA) is formed from divarinolic acid and one out of the first two cannabinoids produced in the cannabis plant. It is the “mother of varin cannabinoids” and has been found to exhibit some excellent therapeutic potentials. CBGVA and CBGA are formed during the maturation process of Cannabis sativa. CBGVA, alongside other varin molecules, was discovered by Japanese researchers in 1977.

CBGVA plays an important role in childhood epilepsy and may limit the growth and proliferation of cancerous cells. A combination of CBGVA and CBGA was most potent and potentiated the anticonvulsant effects of clobazam against hyperthermia-induced and spontaneous seizures. CBGVA can interact with the TRPV1, GPR55, and Scn1a to provide relief from epilepsy disorders, myoclonic, and seizures.

Cannabidiolic acid is one of the most researched cannabinoid acids. Just like CBD, its neutral counterpart, CBDA has shown several potentials in providing therapeutic relief in several disease conditions. Although most attention has been shifted to CBD, there are some wonderful therapeutic potentials identified for CBDA.

The first use case of CBDA dates back to 2008 when researchers discovered its inhibitory activity on cyclooxygenase-2 after appearing to have shared the ability with CBD to activate TRP, TRPA1, TRPV1, and TRPM8 cannabinoid receptors. Unlike CBGA, the activity of CBDA was found to be less potent than CBD. The bioactive activity of CBDA has been widely reported as an anti-inflammatory agent, pain relief, anticonvulsant, antiemetic, and anti-carcinogenic. The anti-carcinogenic properties of CBDA center on its ability to limit cellular proliferation and migration of cancerous cells.

Tetrahydrocannabinolic acid (THCA) is the acidic precursor of tetrahydrocannabinol, the major psychoactive compound in the plant. It is biosynthesized and accumulated in glandular trichomes present on leaves and flowers, and it is responsible for protecting the plant against invaders like insects. It represents about 90% of the total THC content of the cannabis plant.

Research shows that a combined dosage of THCA and CBDA can trigger relief from acute nausea. This means THCA can undergo a synergistic relationship with other cannabinoids to promote their activity. This is quite common for acidic cannabinoids like CBGA and CBDA, which improve the overall activity of their neutral forms when combined in the same product.

There are also reports on how THCA can alleviate collagen-induced arthritis by interacting with PPRAG and CB1 receptors. One unique feature is rooted in how THCA can interact with both CB1 and CB2 receptors to provide a vast array of therapeutic benefits, although the reaction at each receptor site may differ. This is quite an improvement over the other acidic cannabinoids that show little to no interaction with the CB1 and CB2 receptors.

THCA can act as an orthosteric CB1 receptor and an inverse agonist of CB2 receptors. This interaction with the receptors can prevent the infiltration of inflammatory cells and cartilage damage.

Information from cell-based experiments suggests that THCA might exert useful therapeutic benefits by serving as an immunomodulatory, anti-inflammatory, neuroprotective, and antineoplastic agent. The therapeutic activities of THCA are largely attributed to its interaction with several cannabinoid receptors like TRPA1, TRPV1, TRPM8, TRPV2, FAAH, and more.

Cannabichromenic acid (CBCA) is a rare cannabinoid with excellent anticonvulsant activity. Just like every other acidic cannabinoid, it is present in the young cannabis plant and gets converted to Cannabichromene. It also has a role as an antibacterial agent and a plant metabolite.

Although the concentration of CBCA in the cannabis plant is quite low, there are pieces of evidence pointing to its Anticonvulsant activity against hyperthermia-induced seizures in the Scn1a+/− mouse model of Dravet syndrome. This activity was observed in combination with CBCVA (cannabichromevarinic acid).

Cannabinoid acids undergo a synergistic relationship with their neutral counterparts and other cannabinoids to improve the overall therapeutic potentials. Most research papers show that combining acidic and neutral cannabinoids in a single product can reduce dosage and increase effectiveness.

Interested in investing or growing your health business with CBGA?