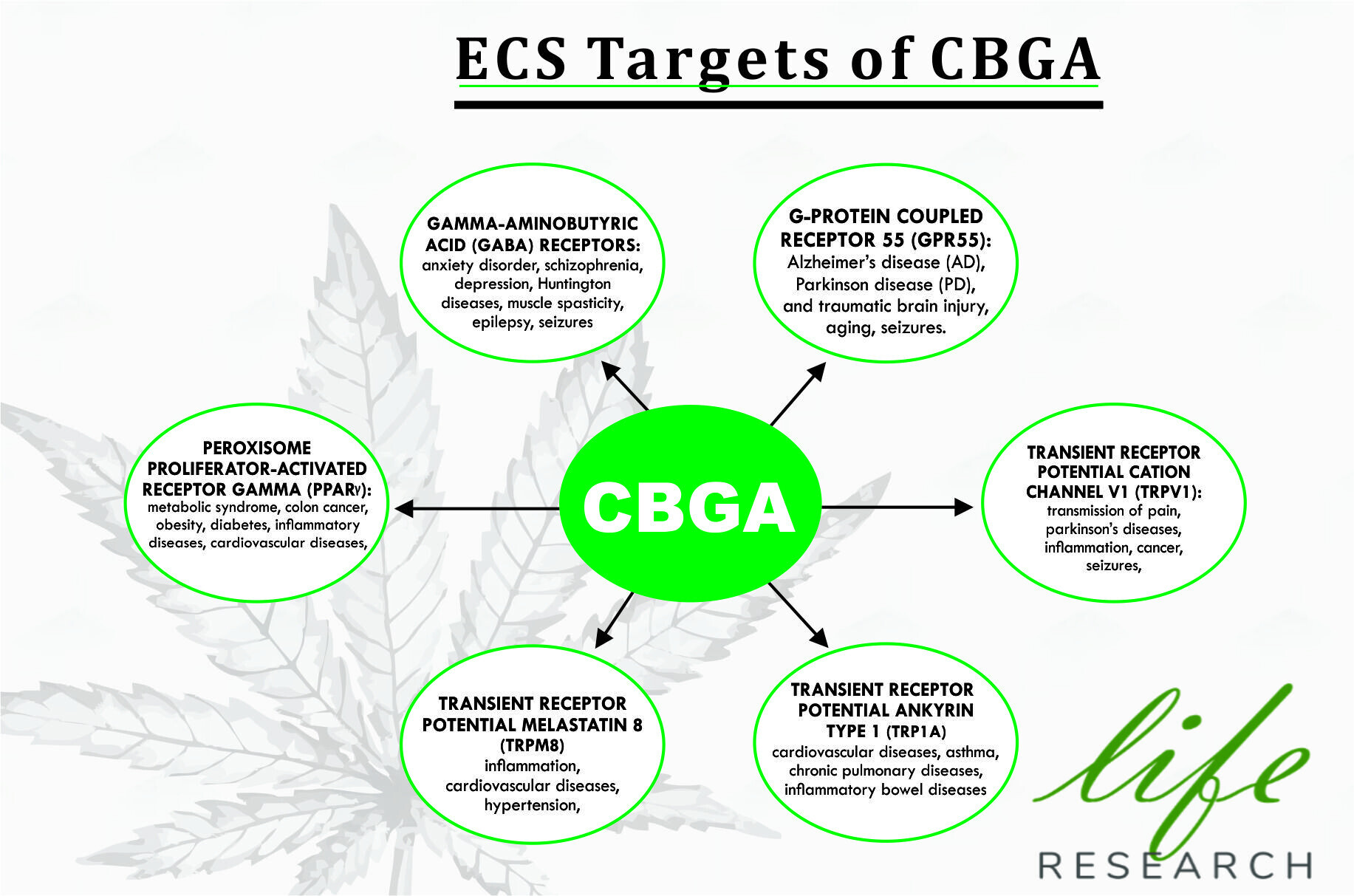 What are neuroreceptor targets and why are they important?

Cannabinoids, just like any other bioactive compound, rely on the existence of target sites or receptors to produce their effects. These receptors serve as a key that activates the cannabinoids. Apart from activating the cannabinoids, the receptors also play a key role in determining the level of effect recorded and which organ or body will be involved in the reaction.

The fact that cannabinoids can interact with the endocannabinoid system is a good reason they have such a broad application level. The cannabinoid system consists of receptors expressed in the central nervous system, peripheral organs, and immune system. Apart from these receptors, other targets determine the antiseizure, anticancer, and antidepressant properties of CBGA. Note that CBGA exhibits little to no interaction with the CB1 and CB2 receptors, but a good relationship is discussed below.

G-protein Coupled receptors (GPCR) are identified as one of the largest and most diverse receptors in animals. They serve as an inbox for messages in the form of peptides, lipids, fats, and proteins. Some researchers believe about one-third to one-half of marketed drugs exhibit their activities by binding to these receptors.

GPR55 plays an active role in the therapeutic activities of cannabinoids. A group of scientists discovered that CBGA acts as a non-competitive antagonist (either binds to allosteric sites of the receptor or binds to the receptor site in an irreversible manner) of the GPR55 receptor when evaluating the anticonvulsant properties of the cannabinoid acid.

The receptor is involved in pain sensitivity relating to inflammatory and neuropathic pain. The receptor can initiate a change in cellular activity and may increase intracellular calcium concentration in the neurons during seizures. Apart from its expression during seizures, GPR55 is also associated with disease conditions like cancer, diabetes, obesity, and the gastrointestinal tract, thus making CBGA a promising remedy for these conditions. The presence of this receptor in the central nervous system supports the possible use of CBGA in mental conditions like anxiety, depression, and pain relief.

During seizures, the activities of the GPR55 may be altered, thus leading to the elevation of presynaptic calcium ions. By interacting with CBGA, the excitation level of the receptor is modulated, thus leading to anticonvulsant effects.

Members of the transient potential channel subfamily V member 1 (TRPV1) are also known as capsaicin receptors or vanilloid receptor 1 (VR1). They are expressed in nociceptive neurons (neurons that respond to damaging stimuli by sending threat signals to the Central nervous system). These receptors are responsible for the transmission of pain.

Note that capsaicin is responsible for the pungent smell of hot chili pepper. It is involved responsible for the burning sensation by selectively activating the sensory neurons responsible for conveying information about unpleasant stimuli to the central nervous system. It also functions as a transducer of pain stimuli. CBGA can interact with this receptor to inhibit pain transmission.

TRP1A responds to noxious stimuli, inflammatory cytokines, or pungent substances and plays an active role in pain signaling, taste, and inflammation. It is a member of the transient receptor potential family.

CBGA was found to act as an agonist of TRP1A receptors, thus promoting anti-inflammatory properties and analgesic effects.

These receptors are activated by chemical cooling agents (like menthol) or when ambient temperatures drop below 260C. They play a critical role in detecting cold stimuli. They are also involved in the transmission of sensitive roles in cold evoked pain stimuli. TRPM8 has been reported to play important roles in skin anti-inflammatory properties and was initially thought to be triggered CBG. CBGA was found to play an antagonistic role on these receptors.

PPARγ or PPARG is a member of the supergene family of nuclear receptors responsible for the transcription and regulation of genes like cellular intermediary metabolism and inflammation. They are directly involved in regulating fatty acid storage and glucose metabolism, thus indicating a good point for the antidiabetic potentials of CBGA. The activation of PPRG can inhibit the growth of cultured cell lines from the human breast, prostate, and lung cancer. Researchers have discovered that Cannabinoid acids like CBGA, CBDA, and THCA are more efficient at activating the PPARG receptors and may be super active in killing cancerous cells.

GABA is an amino acid that functions as the primary neurotransmitter for the central nervous system. It is responsible for reducing neuronal excitability via the inhibition of nerve transmission. The neurons are located in the brainstem, hypothalamus, basal ganglia, thalamus, and hippocampus. They also take part in stabilizing neurological functions.

Low levels of GABA have been associated with several diseases like those affecting the brain and mental health. It is responsible for generalized anxiety, schizophrenia, autism spectrum disorder, and depressive disorder. They are also associated with seizures and epilepsy, where CBGA is examined to increase the peak currents, thus assisting people with epilepsy and seizures.