The Anticancer Properties of CBGa 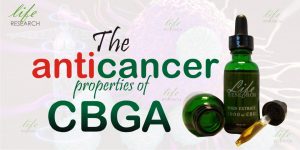 Cancer is one of the world’s deadliest diseases, accounting for about 606,520 deaths and 1.3 million new cases in 2020 in the United States. Globally, about 19.3 million new cancer cases are recorded annually with over 10 million cancer deaths.

Global cancer rates continue to grow due to a multi-factored barrage of toxic diet, environmental carcinogens, and increasing sources of technological radiation.

While the condition affects all ages, information from the American Cancer Society shows that female breast cancer tops the list with over 2.3 million new cases in 2020, closely followed by lung cancer, colorectal cancer, prostate and stomach cancers. Lung cancer remains the leading cause of cancer deaths, with an estimated 1.8 million deaths followed by colorectal, liver, stomach, and female breast cancers.

On average, women use about 168 toxic chemicals daily, some of which are highly carcinogenic. These chemicals are active components of cosmetics, perfumes, personal care products, feminine and hygiene products. By constantly disrupting the body’s homeostasis with free radicals, cancer becomes an almost foregone conclusion.

Part of the tragedy is that women are driven to poison themselves by unjust social constructs. Without going into more detail right here, one could reasonably speculate that women feel more keenly the pressure to always look and feel good, ultimately repressing anxieties that bear severe consequences.

We owe it to our wives, sisters, and mothers to change society by changing the way we think. That means adopting sustainable means of self-care that maintain good health instead of making us sick.

Before now, the anti-cancer, antioxidant and anti-inflammatory properties of CBD and other cannabinoids have been explored. Cannabis molecules modulate the whole body network known as the endocannabinoid system to neutralize carcinogens and maintain healthy biostasis. The ECS nourishes the immune system which is the first defense against cancer. Cannabis also has much to offer patients going through chemotherapy for the same reasons.

Can CBGA play a role in cancer treatment?

Colorectal cancer is the third most common cancer diagnosis globally and the fourth leading cause of cancer related deaths. A 2018 research reported that purified cannabinoids including CBGA assisted in preventing cancer proliferation, and metastasis while inducing cellular death of cancer cell lines. Although the researchers used whole cannabis plant extract, further analysis revealed the presence of CBGA, CBDA and THCA. These compounds synergistically aided the cannabis induced apoptosis in the cancer cell lines. This and many more reactions are leading the research on developing a novel cancer drug containing CBGVA and CBGA.

WebMD describes chronic lymphocytic leukemia as a type of cancer in which the bone marrow makes too many lymphocytes (a type of white blood cell). Chronic lymphocytic leukemia (also called CLL) is a blood and bone marrow cancer that usually gets worse slowly. It is one of the most common types of blood cancer in adults. Scientists were able to identify the anti-cancer properties of CBGA on cancerous leukemia cells. The researchers documented the cytotoxic effects of CBGA on cell lines from lymphocytic leukemia. The cytotoxic effect of CBGA was better when combined with CBD, thus indicating some form of synergistic reaction between the cannabinoids.

The antioxidant properties of CBGA can go a long way in neutralizing the harmful effect of free radicals in the airways. This can help in clearing the bronchioles of contaminants and imbalance. CBGA also seems to exhibit cytotoxic effects on cancer cell lines from the respiratory tracts.

Some researchers documented the accumulation of CBDA and CBGA in brain tumor tissue after intranasal administration of hem EVs. This caused a delay in tumor growth and enhanced the survival of tumor bearing mice.

In addition to excellent antioxidant potency, CBGA can inhibit prostaglandin production (even though the inhibition level was relatively low). Prostaglandin plays a critical role in influencing the adhesive, migratory, and invasive behavior of cells during the development and progression of cancer. This is possible via the inhibition of cox-1 and cox-2 enzymes that catalyze the production of prostaglandin.

Other activities of CBGA that may assist CBGA users

The fact that CBGA can interact with several molecules and receptors gives it a variety of therapeutic potentials. CBGA promotes better sleep which is critical in the body’s fight against any disease. The antioxidant properties of CBGA can boost homeostasis, and regulate body pain. There are also reports on how its anti-inflammatory effects on the cells can help in modulating immune responses.