What if Cannabis was a Football or Soccer Team? 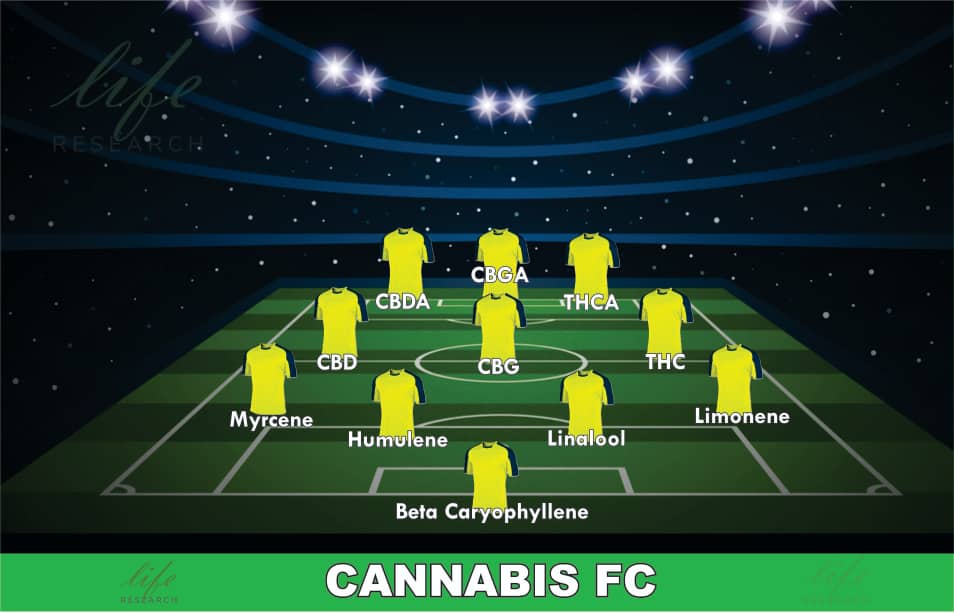 If cannabis was a football/soccer team, what cannabinoid or terpene would most likely be your favorite player?

As cannabis medicine continues to advance, our world is yet to experience the best it has to offer. So far our biggest discoveries are nothing but a step out of the cave. Of the 120 cannabinoids identified from the cannabis plant, major research findings have revolved around cannabigerols, cannabidiols, cannabichromenes, cannabivarins, and tetrahydrocannabinols. Other rare cannabinoids like cannabifuran (CBF), cannabicyclol (CBL), Cannabielsoin (CBE), Cannabichromanon (CBCF), Cannabiglendol,  Cannbicitran (CBT), and Cannabiripsol (CBR) are still understudied.

Every cannabinoid and/or terpene is unique in its ability to interact with the cannabinoid receptors or trigger responses thus, explaining why the cannabis plant is an excellent bio-pharmacy. Several years of research have pointed to how the plant can provide awesome results that show promise in dealing with mental disorders, neurodegenerative diseases, and more.

While cannabinoids and terpenes are capable of independent interaction with the cannabinoid receptors, they function as a team to provide the best results. This is why terpenes are a big deal in cannabis medicine.

Welcome to the Cannabis Football club

Every coach loves to put their strongest team forward. This is why acidic cannabinoids would most likely occupy the offensive line if cannabis was a football/soccer team. The acidic cannabinoids, although limited in supply (in some strains), offer quite a good level of activity that surpasses that of neutral cannabinoids. The presence of phenolic and carboxylic groups makes them a good candidate for interacting with the cannabinoid receptors and body cells. This is why they were excellent at preventing the entrance of COVID into human cells.

CBGa: Cannabigerolic acid will most likely occupy the first line of offense. It will be that dangerous striker/goal scorer who controls the ball with both feet and can launch a good attack. It will be in the front line of offense and will continue to work with other cannabinoids to create chances that will convert into goals. As a major striker, CBGa is also capable of independent activity and will be seen all over the pitch assisting the midfielders and defenders. It will be the fast player who is not afraid to get creative or run with the ball, create chances for teammates or break the opponent’s line of defense and find out how best they can attack.

CBGa will be the captain of the team, the Coach’s favorite player, a delight to watch, and most importantly, one of the best players in the industry. CBGa is the favorite penalty and free-kick taker who never misses the target.

CBDa: Cannabidiolic acid (CBDa) is that left-wing striker that is always moving to keep the left-wing intact. As a left-wing striker, CBDa possesses a lethal left foot that always connects CBGa and the opponents’ goal. CBDa’s passes and long balls into the eighteen-yard box are always accurate at finding CBGa and THCa to meet their goal.

CBDa can also switch sides with the right-winged striker when the need arises and is seen on the pitch moving up and down to create the perfect chances. Its connection with CBD in the midfield allows for the perfect activities and creates the best chances for the team.

THCa: Tetrahydrocannabinolic acid (THCa) is the right-winged striker connecting CBGa and CBDa. This triad is always lethal and will most likely create chances that convert to goals. THCa shoots with the right foot and can exchange positions with CBGa and CBDa when the need arises. It terrorizes the opponent on the right-wing and creates chances to connect with CBGa for proactive solutions.

The midfield will be manned by CBG, CBD, and THC, with each neutral cannabinoid connecting with its acidic counterpart. Depending on the activity at hand, the cannabinoids can switch sides to make sure the goal is achieved. For instance, THCa and THC are likely to swap positions with CBDa when a little footwork that will confuse the opponents is required.

CBD: Cannabidiol is one of the first players to join the team and used to be a favorite player until the arrival of CBGa and CBG. Although it has not lost its relevance, age is already catching up with this favorite player and will likely retire soon.

Even as an aged player, CBD’s performance has not depleted a bit since its first appearance on the field. CBD is always on the left wing, assisting CBDa to create chances. Just like CBDa, its lethal left foot does not hesitate to have a shot at goal when the need arises.

THC: delta-9 THC will mount the right midfield work directly with THCa to create chances along with the right-wing. It will connect with CBG and CBD to perform excellent activities on the pitch. This midfielder is right-footed and also creates chances along the line. It interacts with the defenders and strikers to create a balanced play on the pitch.

The line of defense

Terpenes/terpenoids will occupy the defensive line. While not all terpenes/terpenoids may interact with the ECS targets, they are very important in completing the team. They serve as the defensive line that protects the activities of the cannabinoids. They stand guard to defend the bioavailability and transport of the cannabinoids while also playing key roles in the therapeutic potentials of the plant.

Myrcene; Myrcene is that strong left-wing defender who stands like an iron fence and protects the cannabinoids from losing the match. It will sometimes leave its post and overlap to the opponent’s side, creating terror. It can interact with the CB1 receptors to provide some therapeutic activities.

Humulene: Humulene or alpha-caryophyllene is that central defender that interacts directly with the midfielders to ensure a clear passage of information. It stands like a stronghold against every attack of the opponents and keeps the goal post intact.

Linalool: Linalool will work directly with the humulene and other terpenes to keep the goal post out of danger.

Limonene: Limonene mans the right-wing defensive line and maintains a balanced game. Its anticancer activities come in handy in boosting the team’s morale and making sure all forms of oxidative stress are taken care of with ease.

Beta-caryophyllene will comfortably sit in the goal post. Note that this molecule is a terpene that behaves like a cannabinoid. As a terpene, Beta-caryophyllene will interact with the other terpenoids to offer some therapeutic benefits and aromas, while as a cannabinoid, it can trigger the activity of the ECS. Beta-caryophyllene is that famous goal-scoring goalkeeper who never misses penalties, corners, or free kicks. It is always on point and will stop at nothing to ensure the team has a goal in the game. It is always coming to rescue the team in the game’s last minutes.